Nina Lynes and Jude Wilson are climbing Mount Kilimanjaro in August. Here’s the story behind this amazing challenge they are undertaking.

While the idea originated on a yet another drunken night out, it was to aid Nina in being able to say she was doing something worthy of a surprised reaction (or, at the very least, a raised eyebrow) when asked the question “What are you doing on your sabbatical”? The idea of climbing Kilimanjaro was then born.

Fully expecting this stupid idea to fade away, as Nina became more determined they should climb, Jude’s mum, Marg, became increasingly sick. Having already shown cancer who was boss for many years, her body was no longer responding to the treatment. In December 2017 Jude’s mum passed away, leaving a massive hole in the world. It then became clear they should climb to raise funds to fight the devastating C word and make Marg proud (though it should be noted that Marg had thought the climb a truly daft idea!). 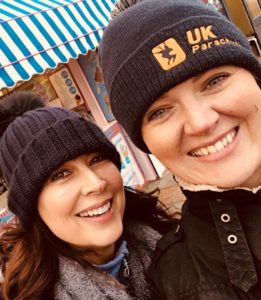 So they’ve chosen to raise money for The University of Southampton’s Immunology research fund. This ground breaking research is saving lives by using the body’s immune system to eradicate cancer. But revolutionary research needs revolutionary facilities. Both Nina and Jude want to help raise £25m to build a new state of the art centre for Cancer Immunology. THEY want to be part of the cure, and invite YOU to be too.

The trip to climb ‘that damn mountain’ (as they now refer to it) will be self funded, so every penny raised will go straight to the charity.

If you would like to make a donation, however small, please visit their JustGiving page.

It will go a long way in helping to save lives, and will also help Nina and Jude justify getting drunk and making yet another stupid pinky promise!